Being human means to take care of your own condition, and this obligation for the self-care, that coined the western culture, is perhaps the main engine stimulating the technological development in general. Indeed, the well constituted individuals are the core units traditionally forming our society. And all the social tools, which are technological tools, are fundamentally a techniques for the self-cultivation, technics of reflection and individuation.

Our understanding of techniques is often pretty straightforward, designating those to the pure utilitarian tool of the everyday use, and we are overlook their crucial role in forming our body, our brain and the very capacity for understanding, that we do use here. But as much as the western languages are sustained by the conception of subject, and a written text has shaped our thoughts from that obscure stream of unconsciousness, new media is also just about to play a crucial role in the further formation of that individual. What type of individual? Perhaps we can theorise that only retrospectively, but being present implies active participating and full embracement of the capacities provided by the new technologies.

“Freedom” – perhaps the concept of the most basic concerns through our existence. In many languages its etymology simply derives from the concept of self–governance and self-control, implying thereby the practices of self-surveillance. The idea of the project is to articulate this obligation for the self-care, enhanced by our digital capacities, and anticipate the role of techniques in the practices of constituting the contemporary subject.

Project idea consists of two parts: technical realization and practical use of the devised tool. In the final stage widget will be attached to the body of the performer and will be used during the performance for several days or weeks.

Practically speaking, it is an attempt to achieve a perspective on the self from the third person view, and to live within this perspective for a while, till the capacities of this new relation with the self can trigger a new understanding, capable for the further theorization and exploration. It is an attempt to articulate our dialectical correlation with techniques, and thus to provide an additional cognitive data in respect to the most persistent concerns of the contemporary society.

From the technical point of view, the installation basically consists of two small cameras and a receiver screen viewed from the VR headset. Two cameras are attached from the back side of the posture-corrector-like jacket with constructed antennas, so that human body, which carries this installation, is viewed from the back above side. The video streams from two cameras are combined in a way that viewed in a VR glasses it creates the 3D view on the acting person, much like the 3rd person view that is often used in the computer games.

The development of the installation is in a working process, and already had been implemented in a different ways in several art projects. The most recent state of this idea is experimented with two web cameras (Logitech c920) and a Samsung Galaxy Note 3 cellphone. The data transfer from cameras to android is managed by the C++ and Java libraries which allow to sustain a direct connection between devises and to obtain a desired video output on the mobile screen. This screen is been viewed by the simple VR Headsets, providing 1080p 3D video stream of the environment and the performer itself. The cellphone is powered directly into the buttery pins, so that devises can be used continuously without the need for recharging.

This particular construction is defined by the basic elements attainable at home conditions within the low budget capacities, and the objective is to realize the idea with more stable and high quality technologies, and to provide a best possible implementation and sustainability for the further utilization.

Performance itself will take place after the widget is technically developed. Basically performance is just to live on the social life and follow the everyday routine, but not from the first person, as it used to be convenient before, but from the 3rd person view. From the phenomenological point of view this devise is supposed to provide a radically new perception of the own body and a new conception of the self,  which has been rendered now in a totality and unity with the environment in which it acts.

This action is, in a way, a technological embodiment of two prominent mythological event that seemingly had shaped the concept of humanity: event of viewing the self from a side (as in a reflection of a mirror) – let’s call a Narcissistic initiation of the human being – and the concept of guardian angels, protective spirits and geniī, which have been initiated from the concept of God, and perhaps substituted today by the cctv cameras, and all sorts of algorithms. This two mythological symbols correspond to the distinctive strive of the human being for individuating the self and socializing the self, and the project tries to explore and articulate the role of contemporary techniques in this particular direction.

The main objective is to anticipate and analyze the further technological implication on the further formation of human being. Reports and documentations for this objectives are essential. Photos and videos of the performance, as well as the reporting text will be combined in a video presentation, which will accompany the publicly exhibited object itself. This designed tool will be available for the public consumption as well, so that everyone will have possibility to experience the observation from the 3rd person view on the self. 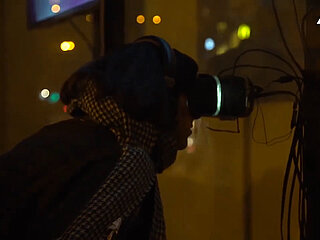 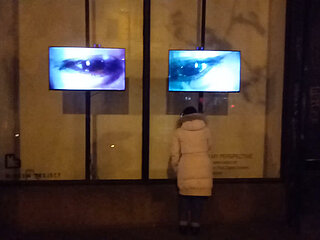 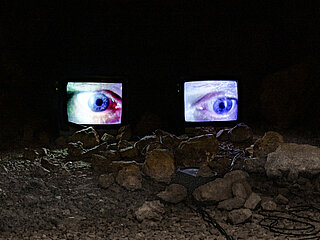 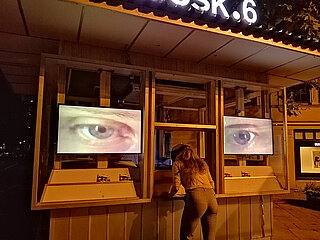 What are the perspectives of the architecture in the participatory age, where the imperative faculties of the monument, pretty much defining this discipline, are dissolve under the democratic pressure for openness and intervention? Project is an artistic contemplation on the perspectives and tactics for sustainable urban environment in the digital epoch of interactivity.

Interactive installation in the public sphere invites a viewer to experiment with the new visual perspectives on the surrounding urban landscape and public environment. This perspective and point of view is conditioned based on the architectural relativity of the building, with which the participants are engaged. Eventually the work tries to depart from the traditional perception of the architecture as an interior and exterior, and investigates its perspectives and potentials created by the new media

I was born in 1979 in Tbilisi, Georgia, and in 2003 have graduated from Tbilisi State Art Academy, faculty of Industrial Design and Graphics Art. Coming from a culture influenced by the transitory processes of the Post-Soviet time, my artistic practice was shaped by the subject of estrangement within urban areas and social spheres, brought about by the archaic cultural forms and relations. This direction was furthered during my study in the Bauhaus University of Weimar in MFA programme ‘Public Art and New Artistic Strategies’. My research was mainly focused on the contemporary role of a Public Artist in the historically established milieu of overwhelming cultural patrimony. My projects were mostly directed towards the exploration of intersections of on some levels antithetical objects (e.g. public idioms and private feeling, artist and spectator) and the properties gained as a result of combination, forming the new set of possible interfaces, maybe more responsive ones to our contemporary needs.